The Men and Women of the Anglo-Irish Treaty Delegation 1921

Dingle Publishing’s latest publishing project, The Men and Women of the Anglo-Irish Treaty Delegation 1921, was launched on the 100th anniversary of the ratification of the treaty, which set up the Irish Free State on Friday 7 January at the King’s Inns, Dublin.

It was launched by the Minister for Foreign Affairs and Minister for Defence, Mr Simon Coveney T.D., and the British Ambassador to Ireland, His Excellency Mr Paul Johnston. The Lord Mayor Councillor Alison Gilliland was an honoured guest and the evening was hosted by the Hon. Mr Bernard Barton, retired judge of the High Court.

The Book
In October 1921 a delegation of men and women, nominated by Dáil Éireann, left Dublin to travel to London. Their mission: to meet the representatives of Great Britain and try to negotiate a peace treaty, which would put an end to centuries of conflict in Ireland. The book, written and edited by descendants of the Irish delegation, tells the human story of all those men and women behind the negotiations in London 100 years ago – many of whom are largely unknown today. The book includes the important role played by women in the negotiations and the ancillary staff from the intelligence staff to the Irish cook to the dispatch carriers.

Fiona Murray of Cork City is the granddaughter of Judge Diarmaid Fawsitt, is a UCC graduate in French and English and holds an MA (NUI) in old and Middle English. She spent her career mainly in education, first as a secondary school teacher and then as an Examinations and Assessment Manager with the Irish State Examinations Commission. In pursuit of her life long interest in history, she enrolled as a graduate student at Jesus College Oxford and in 2021 was awarded her Masters in Hostorical Studies by the University of Oxford.

Professor Eda Sagarra, FTCD, MRIA, of Tyrone and Cork parentage, is a granddaughter of T.A. Smiddy. A UCD graduate of history and German (MA, NUI), she studied at Freiburg i.B, Zurich and Vienna (DPhil). A lecturer in Manchester University (1958–75), she was appointed to the chair of German at Trinity College Dublin in 1975 (MA, Litt. D., DU) and has published widely on modern German literature and history. She is the former Pro-Chancellor of Dublin University and founding chair of the Irish Research Council for the Humanities and Social Sciences. 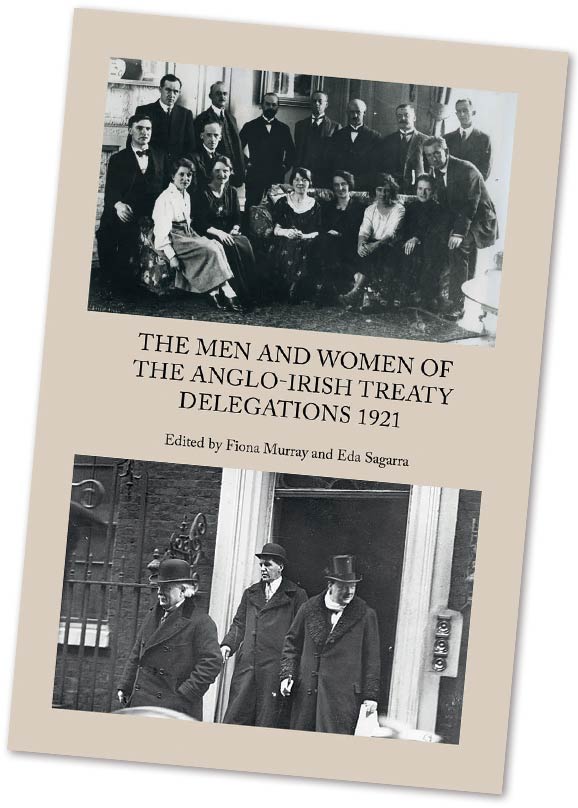 ‘It is a work full of interest and insight, and charts the personalities and contributions of people both well-known and little-known who contributed to the treaty negotiations. Their descendants have created a fitting tribute to the dedication and public service of those delegates.’
British Ambassador to Ireland, Mr Paul Johnston

‘This volume is a welcome appreciation of those behind the scenes who did much to help the Treaty negotiators and a reflection of the complexities involved.’
Professor Colum Kenny 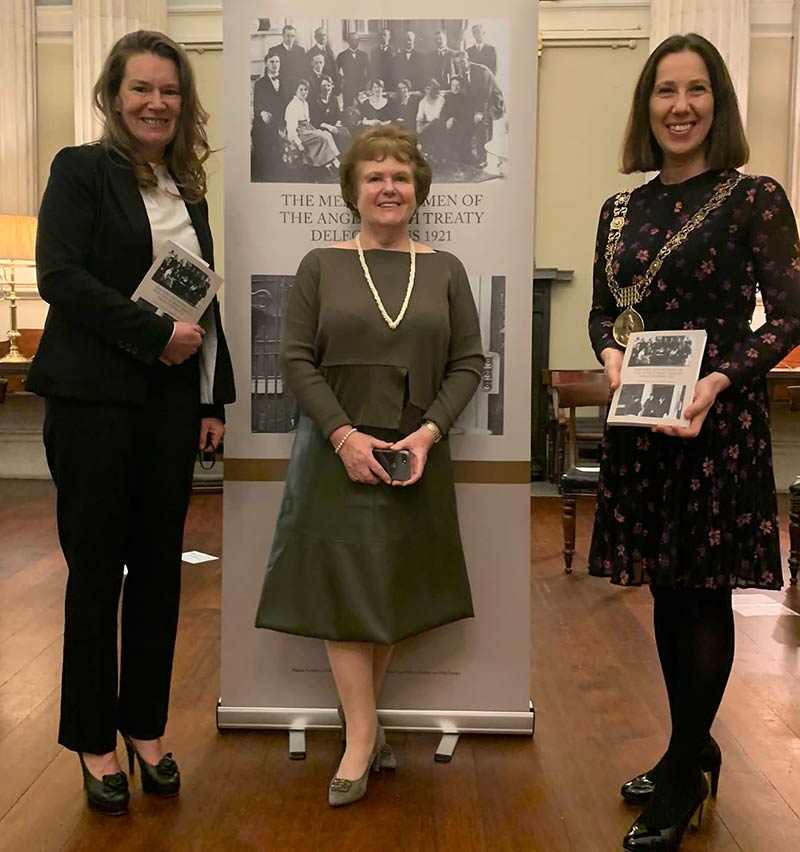 (from Left to right) Siobhán Prendergast, Dingle Publishing, editor Fiona Murray and The Lord Mayor Councillor Alison Gilliland at the launch of The Men and Women of the Irish Treaty Delegation 1921 at King’s Inns, Dublin January 7 2022. 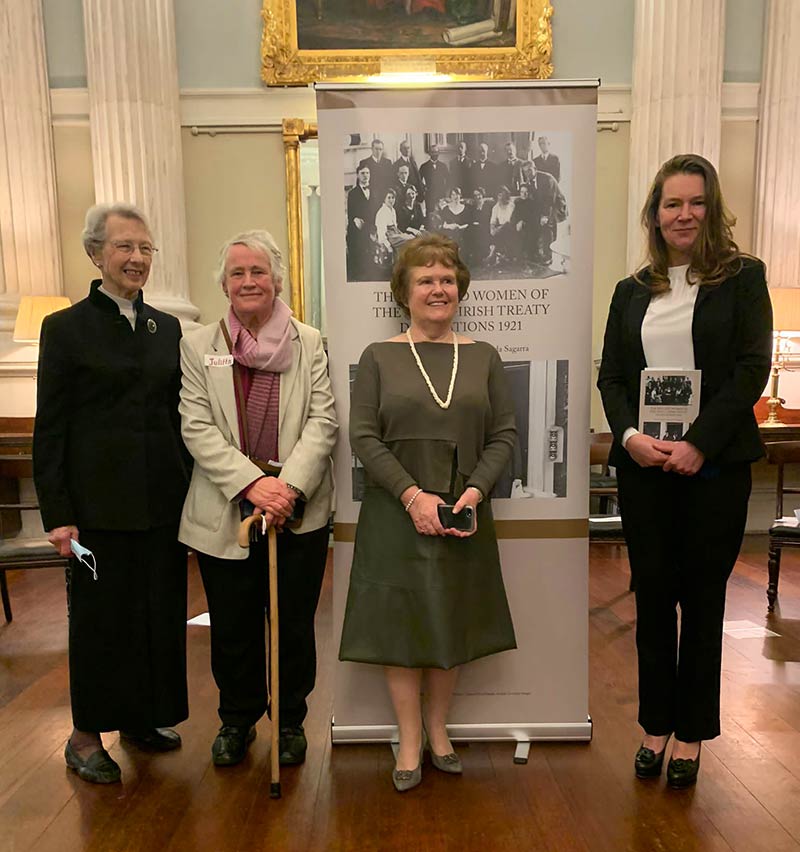 This commemorative edition of the book will be gifted to libraries and universities in Ireland as well as to Dáil Éireann, Dublin and the House of Commons in Westminister, London.

Joint editor, Eda Sagarra, a granddaughter of Irish delegation member T.A. Smiddy, described the book in an The Irish Times article by Ronan McGreevy, as:

‘an important record, as it highlights the identity of a largely forgotten group of men and women who made such a valuable contribution at a critical time in our history.

‘The identities of some 70 delegation members and their descendants were traced in various ways: through personal knowledge, painstaking trawls through archives, histories of the period, genealogical websites, census records, obituaries and death notices. Access to military archives allowed the identification of those, such as security personnel, whose identity would have been a closely guarded secret in 1921.’

Remembering men and women of the Treaty.

‘Most of the 70 Irish people who set out to win the peace 100 years ago (2022) — including key administrators such as Kathleen McKenna — have been forgotten. But now their descendants are setting out to tell their extraordinary stories.’

Read more in the Irish Examiner about this extraordinary book and the stories of The Men and Women of the Anglo-Irish Treaty Delegations 1921 and how important this book is to the recording of an almost lost history of the ‘men and women who formed the Irish delegation sent by Dáil Éireann to negotiate peace in London in 1921, and, in the spirit of ethical remembrance, to do so in an inclusive, apolitical, and person-centred way.’

‘Their stories have never been told, although a small number have had biographies or memoirs published. We are particularly indebted to Kathleen McKenna, secretary to the delegation, whose memoir, A Dáil Girl’s Revolutionary Recollections, provides insightful observations, especially during the challenging two-month period of the Treaty negotiations.’

“Siobhán is a highly experienced publishing professional offering the full suite of services for authors and publishers alike. It was a pleasure to work with her on a recent project and I wouldn’t hesitate to recommend her, and look forward to working with her again.” Conor Graham, Publisher, Irish Academic Press